Over on the Sound On Sound Forum there was an investigation into some of the sounds on Kate Bush’s Hounds of Love album. Poster desmond managed to figure it all out. So I dug in myself and did a few tests with Fairlight sounds, adding the Linn 9000 drums that desmond was unable to nail:

Watching you without me

Running Up That Hill (A deal with God) 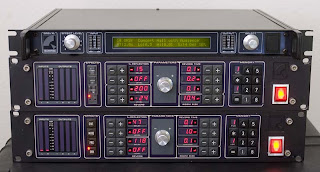 Except for Watching you without me all of the sounds in these tracks were achieved by processing simple single note samples of a cello, specifically Cello 1 and Cello 2 from the Fairlight IIx library. The wonderful airy droning sounds are created by playing a chord into a reverb set to infinite decay. It appears that Ms. Bush used the Quantec Room Simulator for this. Mike Oldfield used this machine for the same effect on his Crises album, as well as the Fairlight.

I haven’t got the chord progression quite right on Running Up That Hill, but it’s sufficient to see how the sounds were put together. What amazes me is that, dry, this pitch modulated Fairlight cello sounds unusable. Goes to show what a creative lady she is. Kate with her Fairlight