There’s a book out criticising Bono, written by one Harry Browne. I haven’t read it. Apparently sales are abysmal. But I’ve read the articles by those caviar socialists Monbiot and Eagleton. Then there is the (as always) brilliant interview work by Gay Byrne (it’s an hour but it’s worth it). 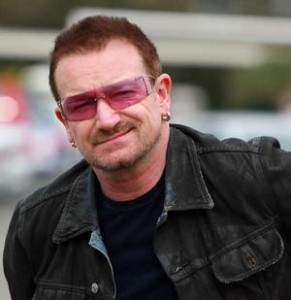 Bono is like the court jester, because he can get away with criticising the “king”. Remember his messing around with Pope John Paul? There’s all the laughing and joking with Bush, but he got stuff done that otherwise would not have happened. Yes Bono’s not the brightest, but he, basically, gives away a lot of money. He supports around 30 charities by himself, the band support a bunch more. And U2 have given away a large chunk of money for music education in Ireland.

Monbiot is babbling about how Bono is stealing the limelight from “real” Africans with “real” problems- but he didn’t provide any evidence of that, despite writing a lovely “academicky” article, with references and all, attacking Bono. I’ve searched around and found only scam “African” charities, I wonder If Monbiot is ignoring those? I’m open to correction on that one though.

The Eagleton article, and Browne’s book too, is a hack job in my opinion. Let’s go through it:

1. Eagleton makes the assumption that being a christian implies a lack of style. As Bono describes in the recent Gay Byrne interview, their street gang dressed as OTT punks before they joined the prayer group, though it did become an issue afterwards.

2. Eagleton’s comment about “the postmodern decline of politics into spectacle” is just stupid. C’mon, look at any newspaper from the 19th century, early political campaigns, or early Punch.

3. Another assumption- “why Bono is both maverick and conservative.” Bono explains that one in the interview, when he talks about including the left and the right in his activism. Basically he uses his fame to get people in power to commit to things they might not do otherwise. He gets them to do good instead of confronting them and getting nothing.

4. Eagleton cherry picks from Viz, a magazine of vastly greater wit than his own- their hilarious description of Bono “”the little twat with the big heart”.

5. “If Bono really knew the history of his own people, he would be aware that the Great Irish Famine of the 1840s was not the result of a food shortage”. Bono has often said that it is corruption that is the problem (again, see Gay Byrne interview) and that is the case with the famine. I don’t know if that’s in the book or if Eagleton made that one up as well.

Everyone is failing to understand the function of tax. Again, Bono answers that question in the Gay Byrne interview, where he points out that Ireland has a tax system designed to attract foreign investment. He also points out that U2 is a business (the implication being that they employ people and need to stay in business). Furthermore if the writers did their research they would be aware that it is only the publishing arm that is based in Holland. All of U2’s other business is based in Ireland. However copyright and tax is a complicated business and is possibly beyond his comprehension. Not surprisingly it’s beyond Joan Burton as well. The fact is that prior to the capping of the Artist’s Tax Exemption scheme, U2 were not taxed on earnings from publishing. I would imagine that in order to maintain the business and to keep Irish people employed, they decided to be tax efficient.

Bono might be annoying. But he is a genuine christian.