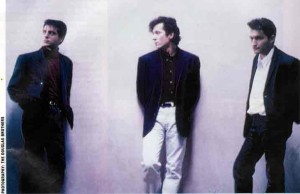 This was the name used by the band Japan back in 1990 when Virgin Records gave them a million to reform. For various reason it didn’t work out, but they produced some amazing music. I recently scanned two articles from the May 1991 editon of Music Technology magazine. There’s an interview with Sylvian, and a separate interview with the rest of the band (Karn, Jansen and Barbieri).

This is the first time these have been published on the web as far as I know. You can read for yourself why things didn’t work out! A must for all Japan fans.