In 1997 I was working in Secret Garden Studios in Glanmire Co. Cork with Rupert MacCarthy- Morrogh. The Kelly Family were living in Cobh at that time, and used to use the studio for CD copying and rehearsals. One time they decided to do a vocal overdub, and brought in their own engineer from Germany, a gentleman by the name of Stuart Bruce. At the time, he was moving back to England with his family and setting up a studio in the Realworld complex. The Kelly’s didn’t do much work, so Stuart chatted with us all day! He was a great story teller. He gave us some cool tips for recording. He was a modest chap and I discovered afterwards that he had worked on a lot of great albums from the eighties. 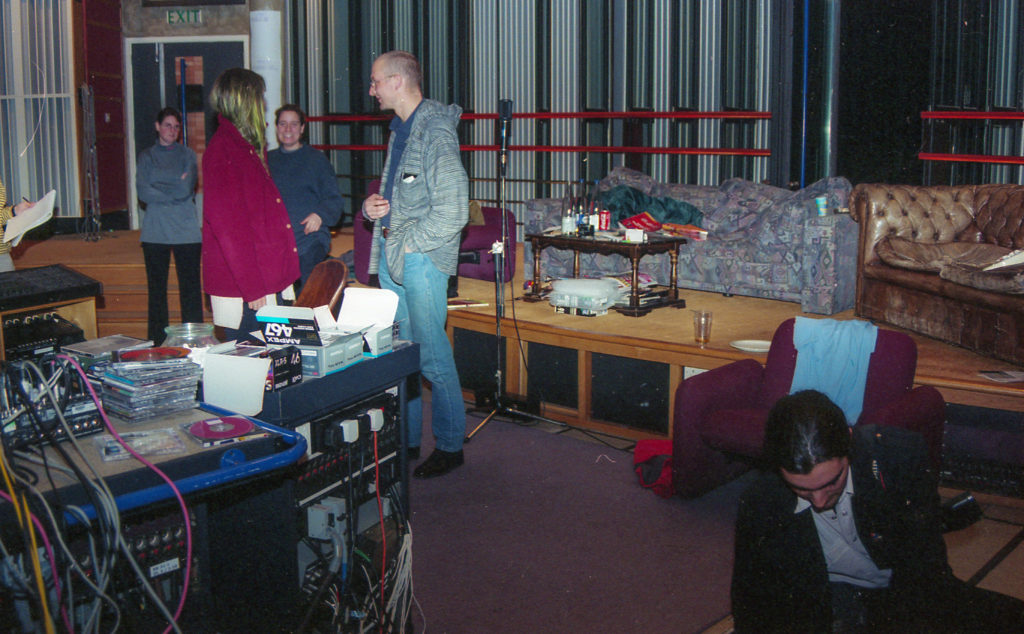 Stuart in the Big Room 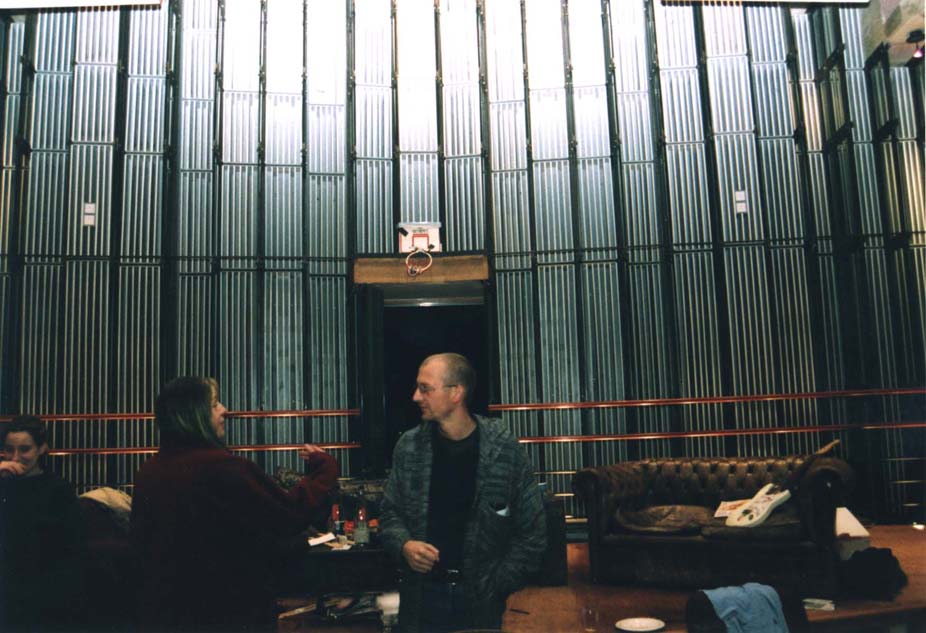 The thing at the back with the basketball ring in it is the diffuser in the main studio. This photo doesn’t do it justice, because in real life it looks like a cathedral. The door underneath the ring leads to the smaller room, which looks like a chapel. It’s very impressive, but compared to the other rooms it’s a bit freaky, so not many people use it!

We got on so well that he invited us to visit his new studio and to have a look at Realworld. So in October, after the APRS show in London, we did. The atmosphere at Realworld was amazing, and the staff were very friendly and chatty. We looked in on the Pro Tools editing session for a Shiela Chandra album and met the producer Hector Zazou who was very warm and welcoming. The sound of Shiela’s voice was very beautiful on the studio monitors. The engineer was hard at work backing up the session onto ADAT while everyone else was having dinner in the sumptuous dining hall.There was a chef and a chandelier- amazing! Even though PT was fairly new back then, we thought it was a bit odd that he trusted ADATs more than a CD-R, because we were using ADATs then and knew how unreliable they could be. Of course, CD-R turned out to be not so great either!

We had an Ace Ventura moment when we opened the sliding door in The Bunker, because the water for the mill runs underneath the building. The soundproofing was very impressive with the door closed!

At the APRS, Sony had a nasty looking bouncer standing next to the Oxford mixing desk on their stand. We avoided him and instead Richard Chappell showed us Peter Gabriel’s Sony Oxford. Did I mention that everyone at Realworld was really nice? Richard looked tired (I think there was a party the night before) but he was very happy to show us around the writing room and talk about equipment. 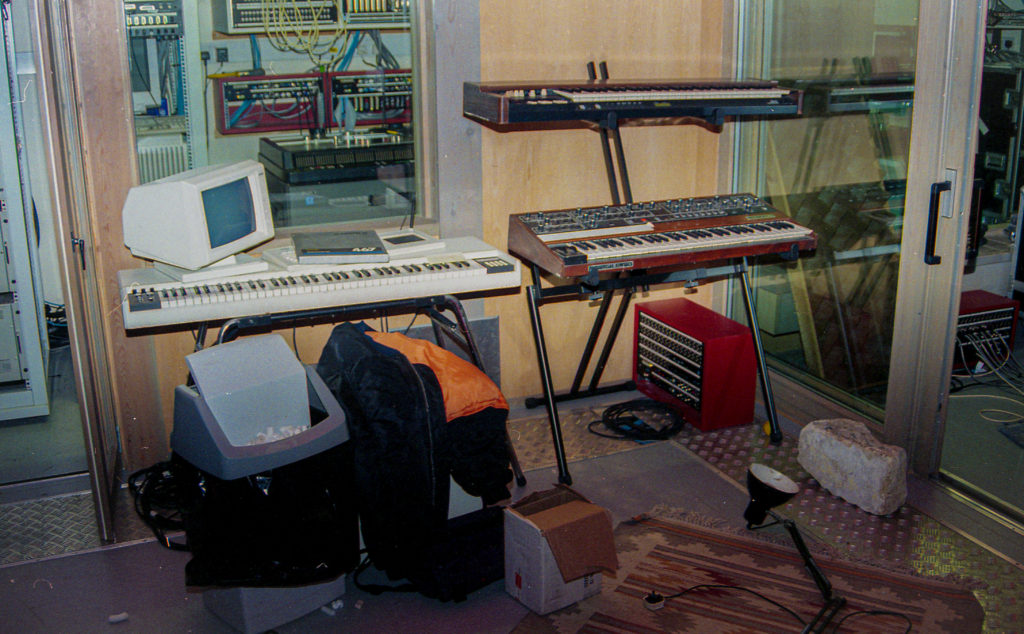 A corner of the Writing Room.

The building is amazing, all wood and stone. The atmosphere is inspirational, and it feels like a great place to make music. In the writing room I was in heaven, because the Fairlight famously used to incredible effect on Peter Gabriel’s fourth album (which lists the Fairlight samples used) was right there. I he got to touch that actual instrument, instantly curing me of my geeky synth spotting affliction (not really). 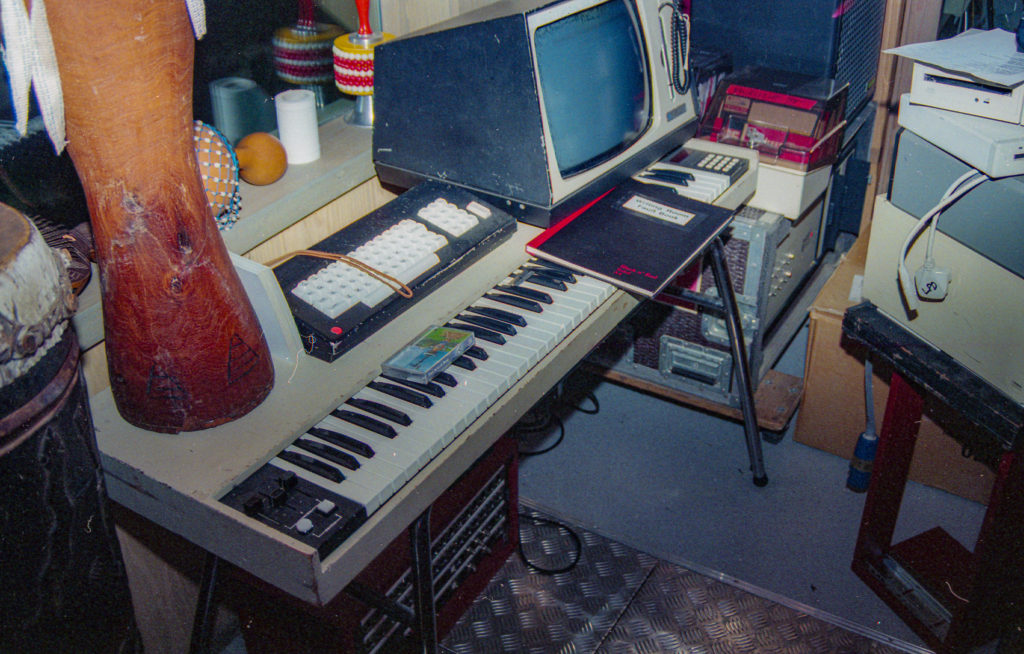 The classic Fairlight CMI IIx as used on Security, and clearly gigged a lot too!

We were so blown away by the place that we didn’t take nearly enough pictures. For example, Stuart’s own studio was based around an Amek Mozart and a couple of ADATs. He had 3 Akai S1000s, a Prophet 10, a Fender Rhodes and a rack full of synths and tasty outboard. One wall had shelving covered by a curtain. These shelves contained an exotic selection of guitar pedals, baby synths and drum machines. Stuart kept them there to help inspire musicians and keep them happy. We saw all the different rooms, which used different materials in their construction to give a range of acoustic spaces. All of these rooms were beautiful places to be, and also looked very beautiful. 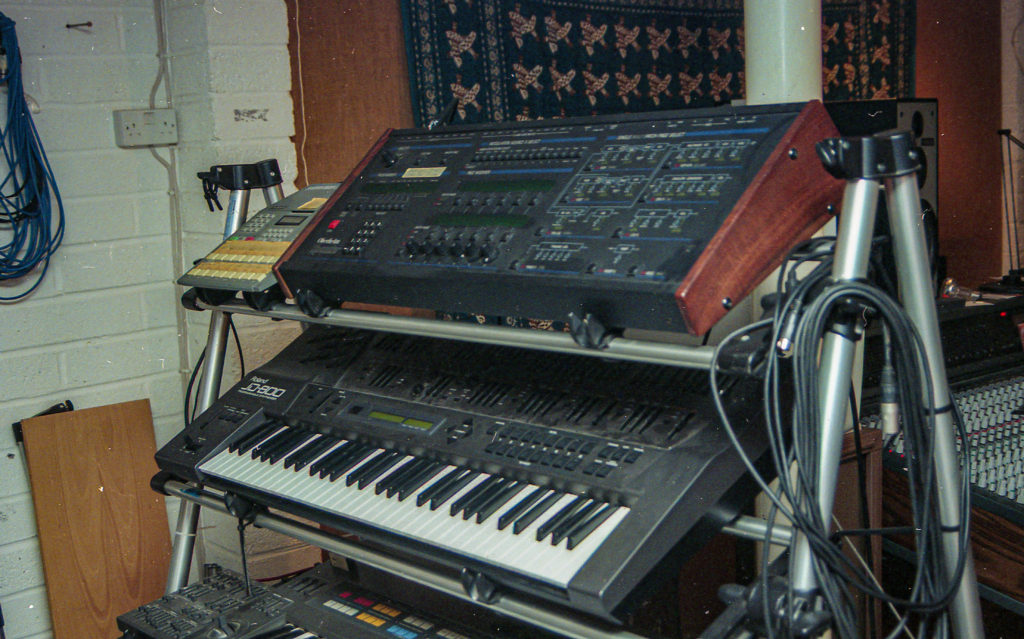 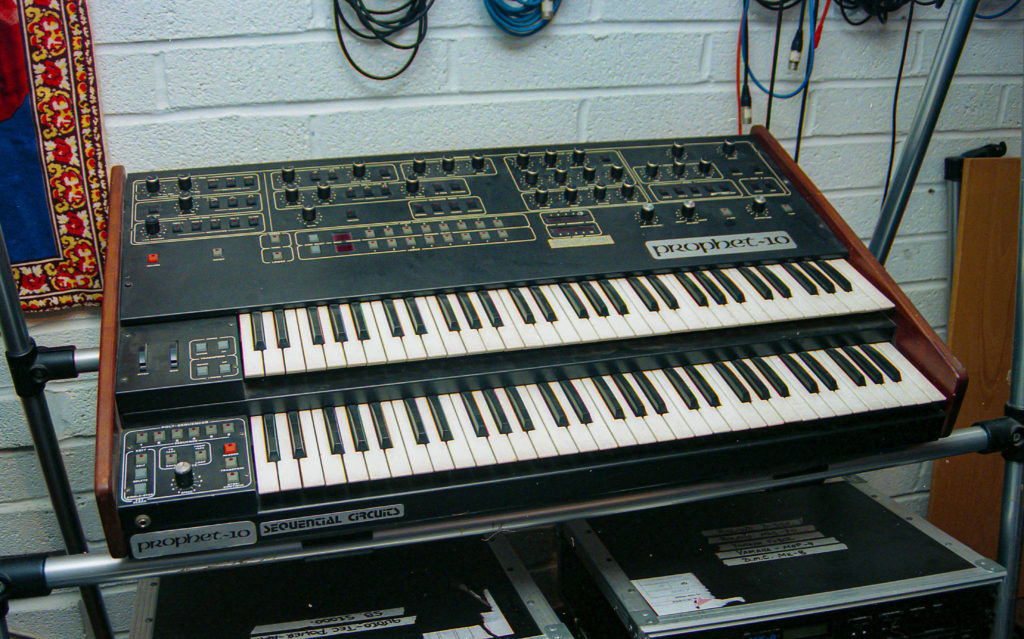 The place was crawling with Eventide Harmonizers. There was gear everywhere. There was a Mitsubishi 32 track in the corridor, and Peter’s EII was being used as an ashtray. To give an example of scale, our studio was based around an 02R. Peter’s keyboard mixer was an 02R. But there was a distinct lack of gear lust in the place, and no snobbery. Peter records on anything- ghetto blasters, ADATs, Sony 3348 and Pro Tools. It was all about inspiration, not gear. The mic collection was extensive and impressive. 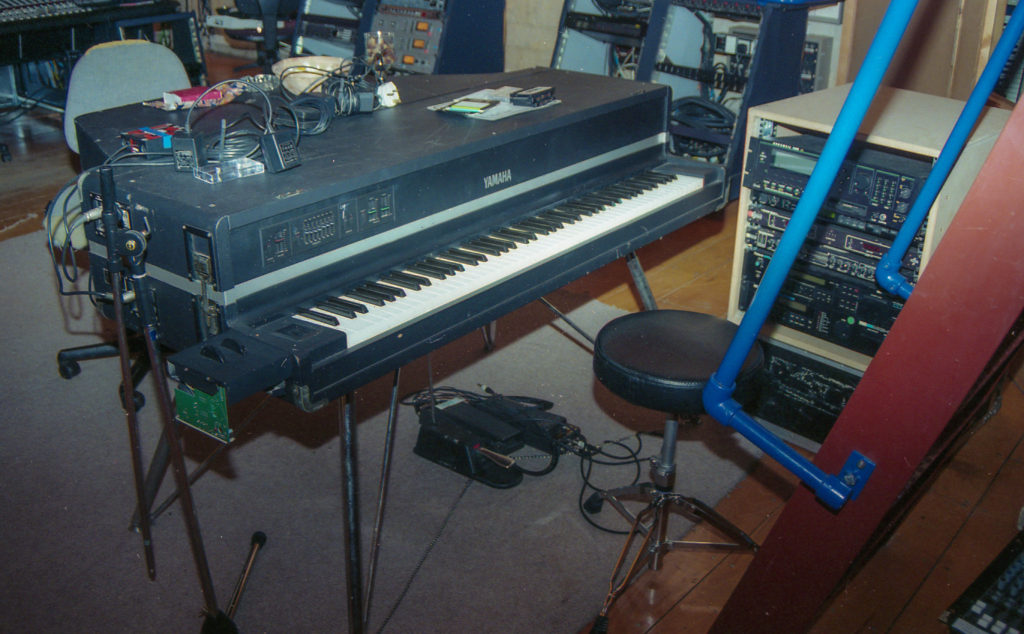 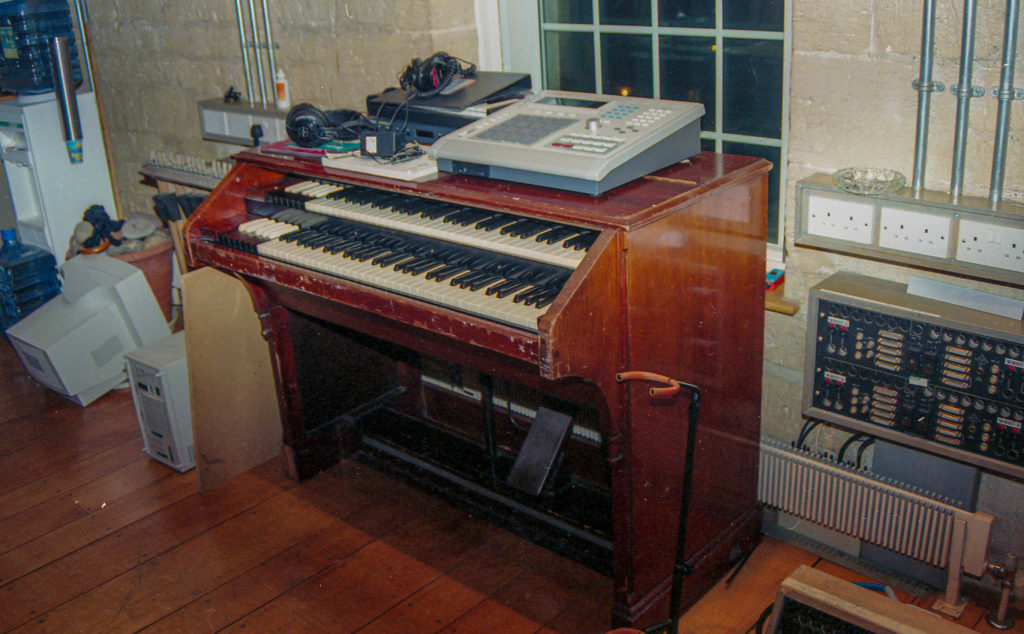 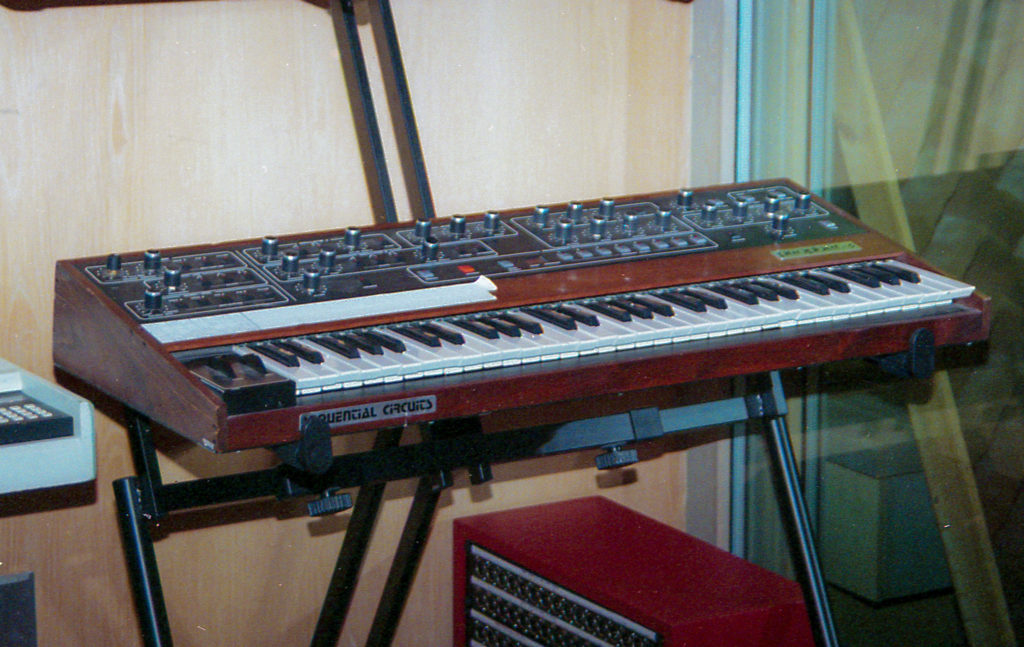 Our visit really showed me that the single most important feature of a studio is the atmosphere. This is down to the people working there, and the building itself. I also learned that professionalism is really about trusting people.